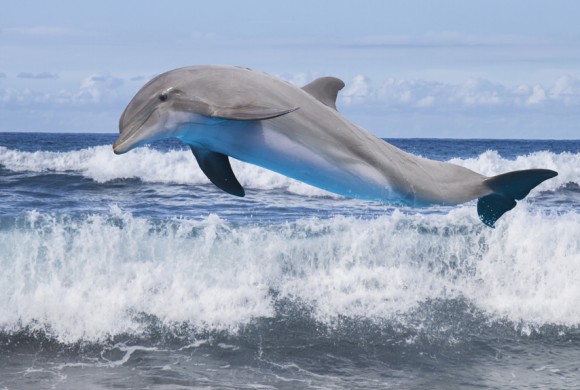 For a number of years  Ric O’Barry’s Dolphin Project and Sea Shepherd Cove Guardians have been monitoring the brutal dolphin drives, which run annually from September until March in Taiji Japan. Their teams vigilantly post images and stream live footage across all social media sites, gaining hundreds and thousands of followers across all corners of the world. Including myself, we watch the horror unfold with sickening stomachs and a frustration at the Japanese government and Shinzo Abe for continuing to allow this senseless slaughter.
Each morning around 6.00am the fishermen will set sail to search for innocent family pods. Relentless and without compassion, the only saviour the dolphins have from the daily drives is inclement weather.

The Diary of Taiji in the eyes of the frustrated!

Seven bottle nosed dolphins stolen from the sea, who have endured watching their families slaughtered around them, who have been force fed by tubes and deprived of food whilst undergoing training, were hoisted by a crane and lowered into tiny cargo crates. Their estimated worth is one million dollars, but their plight is still not over. With just enough water to keep them alive they were ferried in trucks without care, or comfort, on a journey that could last for days. Where their destination we will probably never know, but one thing is for certain, they have been stolen from the sea to serve the captive industry. This brings to question the fishermen’s continual tale of tradition and culture, because what we are witnessing is horrendously cruel drives, which seem to be fuelled only by greed and profitability. 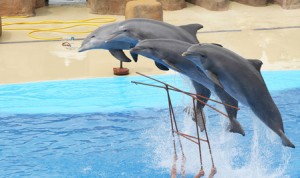 After a long and tireless battle, a family pod of risso dolphins were callously driven to their fate and netted in the shallow waters of the cove. Tarps are pulled over to cover from the eyes of the world the torturous method in which these sentient beings lives are ended. Once this happens we know their death is imminent. This time though the fishermen have been dealt a trump card, a rare albino juvenile is fighting for its life with the others. The trainers are called and along with another member of the pod, the two are ripped from the open sea and dumped into the taiji training pens. Three infants were shown no mercy either, as they were thrown back into the sea to perish. 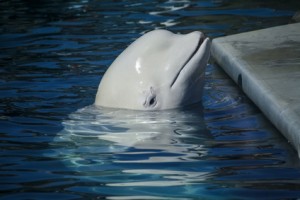 This is not the first albino dolphin to have been captured this year. ‘Angel’ who languishes in the Taiji whale museum, has become a symbol for the dolphins since she was stolen from her Mother’s side in January to serve the captive trade.

For two days bad weather has kept the fishermen’s boats tied up, but in the middle of the night the latest albino to be held in their sea pens, was secretly taken away. Its capture seems to have drawn the attention of the world media once again, including their own – Japanese Times. Out of sight, out of mind perhaps, but one thing is for certain this dolphin is worth a lot of money and has been stolen to serve the captive trade.

Just hours after the albino dolphin has been hidden away from view, the fishermen set out on yet another drive. After a two hour desperate battle, a family pod of risso dolphins are once again driven into the cove frightened and confused. As another albino is witnessed fighting for its life with the fated group, it is hard to digest these fishermen could be delivered yet another prize captivity catch. Once the albino has been ruthlessly ejected from the sea, the tarps are pulled over and the fishermen commence driving their steel rods into the spines of the remaining sentient beings. This is the 16th pod of risso dolphins to be decimated this season and the third albino captured, one thing is certain in the eyes of the frustrated, this isn’t tradition, but to serve the captive trade. 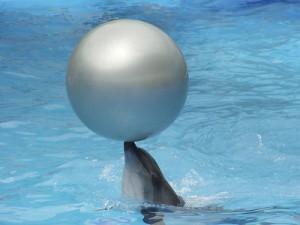 In a country renowned for its innovative technology and leading the way in this field through its expertise and sophistication, I call to question its need for outdated entertainment within the numerous dolphinariums and marine parks in Japan.
I also call to question why an alternative solution has not been addressed to ensure Taiji doesn’t suffer, but where the town could lead the way and show the world, human beings and wild life can work together compassionately and profitably, without harm to the ocean, or to its incredible sea life.
For further information about the Taiji dolphin slaughter and how you can help raise awareness please visit Ric O’ Barry’s Dolphin Project and Sea Shepherd Cove Guardians.  On Friday September 4th  I will be speaking at a peaceful protest outside the Japanese Embassy in London organised by London Against the Dolphin Massacre -Taiji Japan