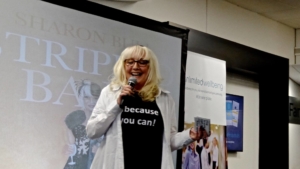 Recognised by government bodies, businesses, charities, women’s organisations, high schools/colleges and Nottinghamshire police, Sharon has been empowering people since 2012. Her 3 h’s – humility, honesty and humour makes Sharon’s delivery unique, and her 30-year struggle with mental health issues instantly caught the interest of the national media. Since starting out under the name ‘A Compassionate Voice’ speaking about mental health awareness, compassion, and kindness, she has featured in countless publications. The most recognised being Stella Magazine, Bella, Psychologies, Woman’s Own, Scottish Woman, Daily Express, and Daily Mirror. Interviews have included ITV’s This Morning with Eammon and Ruth, BBC’s Inside Out and BBC Radio 2’s Jeremy Vine.

Sharon is an inspirational speaker, the 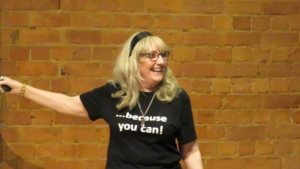 Sharon is also the founder and director of Compassionate Voices CIC and the mastermind behind the ladies wellbeing & empowerment community ‘Compassionate Voices’. Since January 2022 the charitable organisation has been hosting regional hubs in Mansfield, Cramlington, Chesterfield and Derby. The monthly sessions, which kick-started in January 2022 will hopefully be set up in other areas too.