Called ‘Thirty Years in Silence’, the story tells of how Sharon’s depression, anxiety and low self esteem eventually triggered a shopping addiction, which left her in crippling debt.

By 2010, Sharon lost almost everything and in the depths of her despair, she even tried to take her life. Somehow though, Sharon found a way to claw herself back, transform her life, and encourage others to speak out about their own experiences with mental health issues. 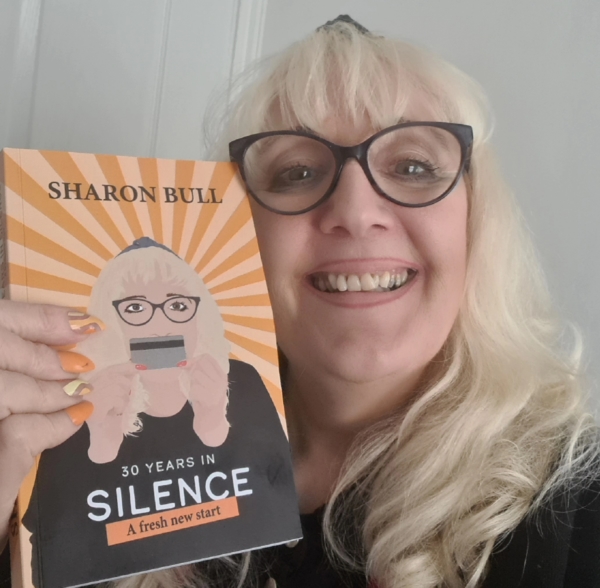 “Nothing is impossible, but we have to believe in ourselves first.”.

Thirty Years in Silence is an eye-opening, stigma busting, inspiring tale that shines a light on the toxic effects of consumerism within today’s society. It’s the story of hoW SHARON swapped credit cards for compassion, and pressure for purpose.

First published in Sept 2017, it has been reviewed and endorsed by many, including musician/presenter – Jools Holland OBE, founder of Animals Asia – Jill Robinson MBE, and British actor – Peter Egan.

“I have known Sharon for almost 40 years. If anyone has the capability and personality to lift the lid on mental health, Sharon has. Stripped Bare does just that.”

“We all hit brick walls in our lives. Some times we are saved by others.. sometimes by ourselves.

I think ultimately the most complete healing comes from self assessment which, more often than not, reveals the path to healing oneself. I found Sharon Bull’s book full of personal insights which confirm this belief. This is an honest and revealing book with a determined path to healing. Sharon has a lot to say and she says it brilliantly. I recommend it highly”

“Sharon Bull has climbed bravely out of a painful abyss, and now shares her honest and vulnerable story with the world.

Finding comfort in compassion, solace in serenity, and strength in unconditional love, Sharon’s life has been saved and inspired by the exquisite beauty of nature and our animal kin. As we rescue them, they rescue us, and so the ripples spread.”

“A wonderful and honest account of one woman´s struggles with anxiety and depression showing that there is a light at the end of the tunnel. Optimistic and heart-warming.”

Susie Pearl, Author of Instructions for Happiness and Success

“Brave and inspiring. Sharon’s story is a great reminder to let go of external expectations and focus on the things that really matter. As she has discovered, real happiness comes from within.”

“In Stripped Bare, Sharon has perfectly communicated how the stresses our modern day lives, fuelled by materialism and greed can demonise us…

and how the constant strive to ‘have it all’, whatever that means, may cause or exacerbate mental health illnesses. Through her experiences she demonstrates how the tranquillity and beauty of the natural world and wildlife can help us live a more settled, less stressful life, and we’d all like that. Perhaps some of us just haven’t realised it yet.”

A universal story of hope and joy – not just for those who feel financially squeezed. We covered Sharon’s story for BBC Inside Out and got a phenomenal reaction from the viewers.”