MY STORY SO FAR… 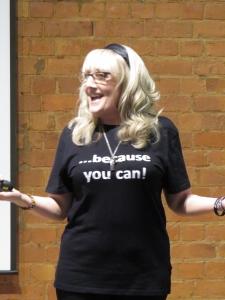 My name is Sharon Bull and in September 2013, I set up in self-employment as an inspirational speaker, and life coach under the name ‘A Compassionate Voice’. Also an author and poet, my mission statement:

to creatively help & inspire others through my own experiences with mental health issues, recovery and well-being.

Personally, I am also a huge advocate of human and animal rights, and lover of wildlife and nature. As A Compassionate Voice, I often use the written and spoken word to influence compassion, kindness and respect for all living beings and the environment. My verse draws attention to mental health illness/awareness, poverty, homelessness, animal exploitation and world issues (including climate change, war, and inequality)

I was working as a successful sales executive prior to the A Compassionate Voice journey. During this time and since leaving school, I had battled with depression and anxiety. This ultimately triggered a shopping addiction, leaving me with £50,000 debt. Approaching my mid years and I lost almost everything, including my life, in a suicide attempt on 28th April 2011.

It was the 29th April 2011, I began a very tough, but determined transformational journey. Kicking out my addiction and managing my mental health 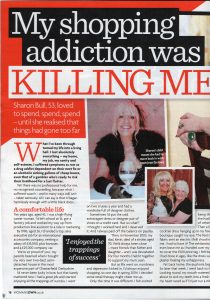 issues, while introducing myself to a more positive lifestyle wasn’t easy. But, my newfound love of writing, along with meditation helped me through the difficult times.

My inspirational story has caught the attention of the media. I have had features in Woman’s Own, Psychologies, Daily Mirror, Stella Telegraph, and the Daily Express. I am regularly asked to do interviews on radio stations, more recently BBC2’s Jeremy Vine Show.

In July 2017, I published my first book Stripped Bare and made my debut TV appearance. Interviewed by Eammon Holmes and Ruth Langsford on ITV’S This Morning, the YouTube video has received over 30,000 views. I have also spent a couple of days with a BBC production team as part of an Inside Out documentary. Aired on Monday 15th January 2018, it was raising awareness to debt and its link to mental health issues.

To create a more compassionate society through encouragement of good mental health, openness, and a better understanding of each other.

The charitable organisation was created to support women, young people and children within the community and with the help of funding from The Coronavirus Community Fund and The National Lottery Community Fund has helped many women during the Covid19 pandemic.

My fundraising began in November 1999 when, I organised my first ever charity event for the NSPCC. Glenn Tilbrook, lead singer from the band Squeeze agreed to do a solo acoustic gig in between the band’s tour dates supporting Blondie. Together, we raised a significant amount of money for the children’s charity. 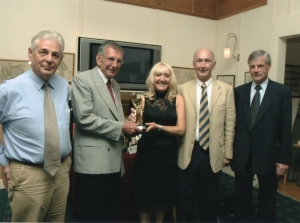 Shortly after my father’s death in 2003 more fundraising events followed. The decision was two-fold. To help me overcome the pain of losing him and to follow in his footsteps by raising money for worthy causes. And so, with the help of volunteers on the 12th May 2005, we held the first of two extraordinarily successful celebrity golf days raising over £8,000 for the NSPCC. The second of the two held in 2006 in memory of my dad.

After the success of the golf days, once again with the help of volunteers, I organised another three events, raising a grand total of £20,000 for disadvantaged children.

A highly acclaimed women’s wellbeing and empowerment workshop & Interactive Journal, The Power of YOU has already received countless recommendations. It is also recognised by councils, women’s centres and businesses.

This Is ME (This is how it should be) is a workshop and downloadable interactive/printed journal aimed at 11 -15 year olds.

Both written by myself and designed by Julie Waring, they are making huge inroads into helping different generations that have been affected by the pandemic.